Listen to the Latest ( 2/24 ) CassGram Audio News PodCast ( CLICK HERE ) Have your Wednesday Newsletter automatically delivered direct to your phone, TEXT WEEPINGWATER to 72727 - and the Newsletter will be delivered each Wed at 1:30pm - Reply STOP 2 Stop, HELP 4Help - 866-932-4774 for info


Two of the six wrestlers from Weeping Water attending the state wrestling tournament came home with medals last weekend.  Billy Schreiner at 125 lbs finished in 3rd place and Tyler Blevins at 103 lbs finished in 5th place.  All six of the wrestlers are to be congratulated on their hard work and perseverance in attaining this honor.  Next year should be another great year for these guys since all but Jace Keckler and Billy Schreiner will be returning.  Keep up the good work!  The following pictures were taken at the State Wrestling Tournament at the Qwest Center in Omaha. 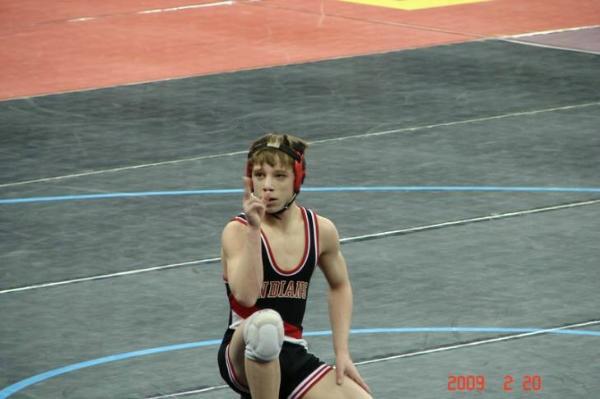 
February 20, 2009, Lincoln—What a difference a couple of years makes in the Nebraska Legislature. The first month of the One Hundred First Legislature, First Session, is behind us. Bill introduction concluded on January 21st, and public hearings before the Legislature’s standing committees are underway.

Because the full effects of term limits have now been implemented, only eleven of Nebraska’s 49 senators have served for more than two years. Leadership responsibilities in introducing bills and becoming committee chairs have made this a very different experience for me as compared to my freshman year in 2007.

During my first year, I introduced four bills. This year I am the principal introducer of 15 bills. My legislative colleagues have elected me to three new positions. I was selected to be one of the 12 senators on the Committee on Committees. This group meets on the first day of the session to place senators on the fourteen standing committees. There is an established procedure, through which committee members are assigned based on the geographic area they represent, plus their personal interests and professional expertise. There is also some politics involved to balance committee perspectives on the issues. I think our efforts were successful, and the committees, with many new members, are already functioning well.

I was elected by the Unicameral body to chair the Nebraska Retirement Systems Committee. Seven members of my legislative class of 24 were elected, with just two years of experience, to chair standing committees. I was also elected by the Health and Human Services Committee to serve as its vice chairperson.

The duties of a committee chairman include setting the schedule of bills to be heard in each public hearing, presiding over the hearings, helping committee members to understand the purpose and consequences of the bills, making sure that all sides of each issue are presented fairly, defending the committee’s decision during floor debate, and trying to minimize surprises for the committee and the entire legislative body. Committee leadership also involves staying abreast of court decisions, the activities of interested or affected parties, and what other states are doing with regard to issues, for which the committee is responsible. A chairman should also identify and facilitate learning opportunities for the committee, so members understand as much as possible about the policy areas they will influence.

The Nebraska Retirement Systems Committee is served by a committee clerk and a legal counsel. Denise Leonard is the committee clerk. Denise joined my legislative staff as an administrative assistant in September 2007. In her new role, Denise is the recording secretary for the Committee. She prepares notices of hearings, maintains notebooks for Committee members, makes tape recordings of the Committee’s public hearings, prepares hearing notes for the legislative transcribers, assists in the preparation of committee reports and committee statements, and makes arrangements for interim study hearings in the Capitol, and, if need be, at sites throughout the state.

Kate Allen is the Committee’s legal counsel. Kate came to the Legislature in 1985. She served as a legislative aide, until she became a policy advisor to former Governor Ben Nelson in 1991. Kate returned to the Legislature in 1993 where she worked, most recently, for former Omaha Senator Don Priester. When I was elected last month to chair the Nebraska Retirement Systems Committee, Kate agreed to serve as the Committee’s counsel. In her new role, Kate conducts legal research, analyzes policy issues, drafts bills and amendments for the Committee and its members, and summaries legislative bills before public hearings and floor debate. She works with interest groups and state agencies, and responds to inquires concerning issues that fall under the Committee’s jurisdiction.

The Nebraska Retirement Systems Committee is fortunate to have such talented and competent staff to help us fulfill our responsibilities.

I appreciate the opportunity you have given me to represent District 2 in the Nebraska Legislature.
We welcome your contacts by mail, phone or email.

Sign-up forms can be located at:
Weeping Water City Offices

Forms must be returned to the WW City Clerk by:
Sunday, March 1st

NO LATE REGISTRATIONS WILL BE ACCEPTED BECAUSE LEAGUE TEAMS NEED TO BE SET IN ADVANCE.

Come early and get registered

SPECIAL OFFER THIS WEEKEND ONLY!!!

COME AND JOIN THE FUN!!

Type in your mobile number in the field below and click "Subscribe" to get newsletter link delivered direct to your phone ea Wed at 1:30pm.
STD SMS & Data Rates apply which means if you currently pay for TEXT messages you send: these that you send to 72727 will also count as TEXT messages. If like most folks you have unlimited Text's you will not see any additional cost for anything. You will probably receive up to 5 addtl. weekly Newsletter msg per month. Anytime you change your mind just TEXT STOP to 72727 and you will immediately be unsubscribed. No matter what you will still receive the good old Email version of the Newsletter.

Use the "Buy Now" button above purchase